If this article didn't make it out on time, it's because I'm working Black Friday at a retail job, which means right now maybe death doesn't seem quite so bad. Well, our science buddy Plutarch might have just the panacea you need for this terrible disease we call living. 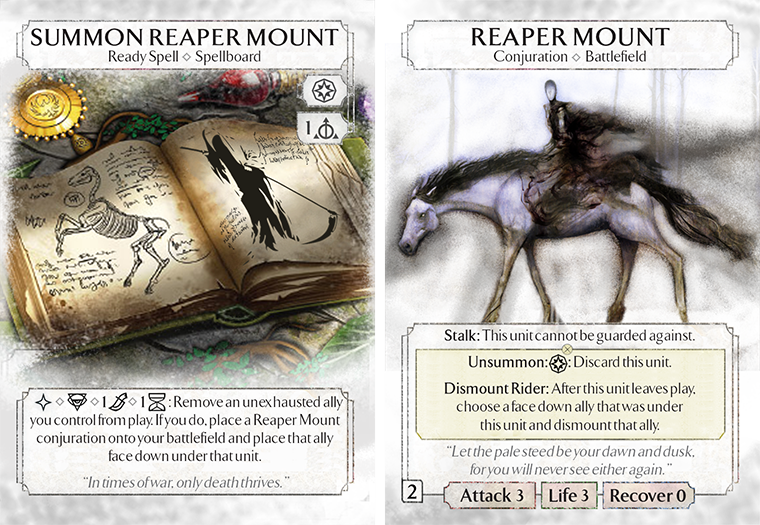 Imitation is the greatest form of flattery, after all. Mounts were a concept originally introduced in The Ghost Guardian and The King of Titans, and it comes back now as powerful as ever. Everyone that's played with the vicious Winged Lioness or the equally vicious Hunters Mark knows just how powerful ignoring guards can be, and the jump from 2 attack to 3 with Reaper Mounts suddenly makes this concept even deadlier. The majority of units in the game have 3 or fewer health, meaning Reaper Mounts can drop almost anything. Not to mention, if the target does somehow have 4 Life, you can always use Plutarch's ability to slap on Imbued Vigor for that one-shot kill. This is one of the more important units in Plutarch's deck, giving you the ability to activate Dark Procurement and Extend Animation, and with pinpoint accuracy. And, as is often the case with most mounts, it's incredibly cost efficient later in the game. In a lot of ways, Reaper Mount is fairly comparable to Cerasaurus Mount, with the Overwhelm replaced with Stalk (depending on the goals of your deck, one may be better than the other).

Now, obviously the big trick with mounts is that they need riders. So far, we've seen the Nihilist and the Alchemist, and those are both decent riders, but I think we can do better: 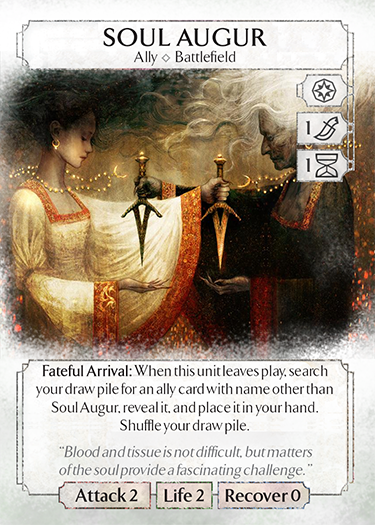 Every mount has at least one top notch rider. Summon Ghostly Mount has toolbox cards like Battle Seer and Hollow, Summon Cerasaurus Mount has the eminent Sun Sister, and for Summon Reaper Mount we have the Soul Augur. In most cases, a good rider is categorized as a unit that has at least 2 Life and some kind of "leaves play" effect, and not only does Soul Augur fill that criteria but she does so with aplomb. She makes for an excellent defensive unit as the opponent really doesn't want to empower you with a free Open Memories for allies, and she'll even give you a chance to figure out what sort of ally would best suit the opponent you're playing against. Maybe a wide board demands a Crimson Bomber or Raptor Herder, while an especially large threat might do better with a Grave Knight or even a Sleeping Bear. And of course, you can always opt to go for broke with Elephant Rider. Soul Augur is also quite powerful with Summon Necromantic Abomination, as the allies you feed to it can be either from under your PB OR in your hand.

Now, within Plutarch's deck, there are many good options for Soul Augur to fetch. Alchemist helps you fix dice better, Nihilist is great for triggering your Dark Procurements, and if you need something extra difficult than maybe fetch one of these: 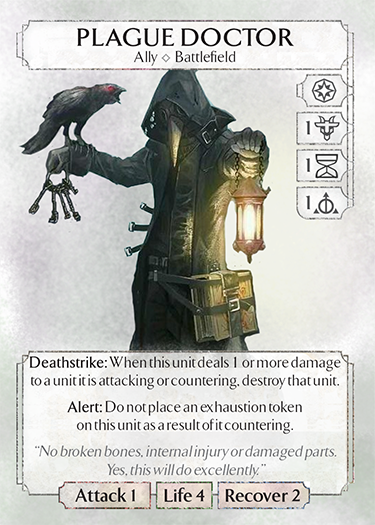 If you really don't want your opponent to swing at you again, bring out the Plague Doctor, aka discount Gobi Sunshield. Unlike the Nightshade Swallow (aka the last unit with Deathstrike), Plague Doctor is more likely to survive an attack, and because of the Alert ability he won't even get exhausted for doing it. This unit presents quite a conundrum for attackers; he can kill small units without exhausting, but he can also kill big units regardless of life value. Now, on the one hand, there are a few ways to skirt around the Doctor, but there's also ample solutions to cover those contingencies. Because of his 1 attack power, you can declare multiple attackers and he'll only be able to kill one at a time, but if he gains any attack boost at all (say, from a Bloodstained Dagger), that option starts looking a lot worse. Alright, well you can always opt to attack units that aren't the Plague Doctor since he only attacks for 1 anyways, but that can get really tough if you're opponent is running around with Hastened Response. Finally, since Deathstrike only triggers on attacks and counters, you can always kill it through direct damage through Devlin's Trial by Fire or big damage sources like Earthquake or Phoenix Barrage, but that 4 Life can be difficult to chunk through. No matter the circumstances, Plague Doctor always seems to have the tools to be effective.

Alright, we've talked about the many effective ways in which Plutarch can just kill all your units, but he also has a few techniques that stop you from killing his units as well...because he's gonna get to it first. 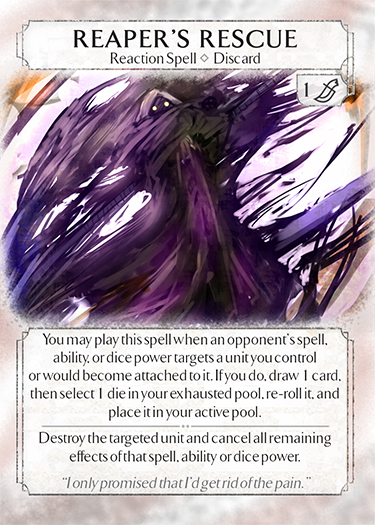 Alright, let me break this one down for you. Basically, if your opponent tries to do anything to your unit, you can use Reaper's Rescue to just kill the unit instead. What a bargain!

In all seriousness though, this card can be a surprising turn around against a host of unusual effects. Opponent tries to Phoenix Barrage your unit for 4 and also deal 2 damage to you? Just kill the unit, which in turn cancels the rest of the spell and effectively saves you 2 damage. Harold tries to Mark Prey targeting your unit and setup a Harvest Soul? Just kill it, and since your opponent didn't kill the unit they don't get to harvest either. Opponent attempts to Blood Chains you down for about 4 exhaustion? You know what to do. As icing on the cake, Reaper's Rescue also covers nasty alterations, providing "protection" from such nasty effects as Regress, Deep Freeze, and the dreaded Mark of the Goddess. Best of all, because Reaper's Rescue kills the unit, it can also trigger death effects from cards like Dark Procurement and Chant of Revenge. 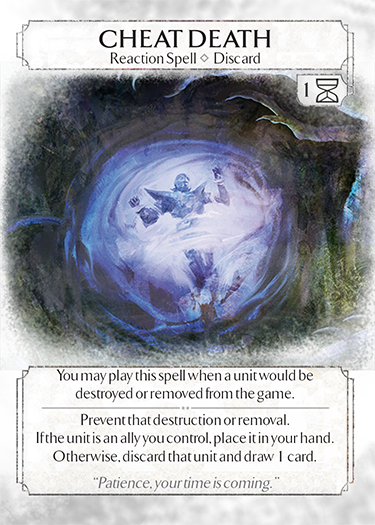 Cheat Death is a bit bizarre because it can actually stop a whole variety of different acts from taking place. We've already mentioned Chant of Revenge, but Cheat Death can also prevent things like Chant of Sacrifice and Brennen Blackcloud's main ability. Using Cheat Death on a unit can also make it an invalid target for Harvest Soul. Similar to Reaper's Rescue, using Cheat Death doesn't slow you down too much as the card replaces itself, either with the ally you just saved or by simply drawing a card in the case of a conjuration. Between this and Reaper's Rescue, there's a bunch of new counterplay application that opens up for dealing with many staple deck constructions, but in the case of Cheat Death I think it may also help open deckbuilding for an often underlooked PB: Sembali Grimtongue. Being able to return allies back to your hand even when they die makes it even easier to trigger Ban Manifestation and Chained Creations, and the fact that it fills your hand in the process makes her awkward costs a little more palatable. Maybe give her a try with Cheat Death, you might be surprised.

That's all we have for Plutarch, but come back tomorrow for the rest of Devlin. Now I'm going to sleep, I have another long shift tomorrow :(